Today’s installment of slides comes from the speech of Belarusian Defense Minister Andrei Ravkov. While last year, Ravkov’s speech immediately followed and was largely complementary to Valery Gerasimov’s speech, which focused on European Security, this year he got to headline the panel on European Security himself. This was convenient for his staff, as they didn’t have to change the title slide at all, and really only made superficial modifications to a number of other slides. Compare the slides below to last year’s slides. I guess as far as Belarus is concerned, European security hasn’t changed much over the last year. The Ravkov speech is available on video in Russian and English. 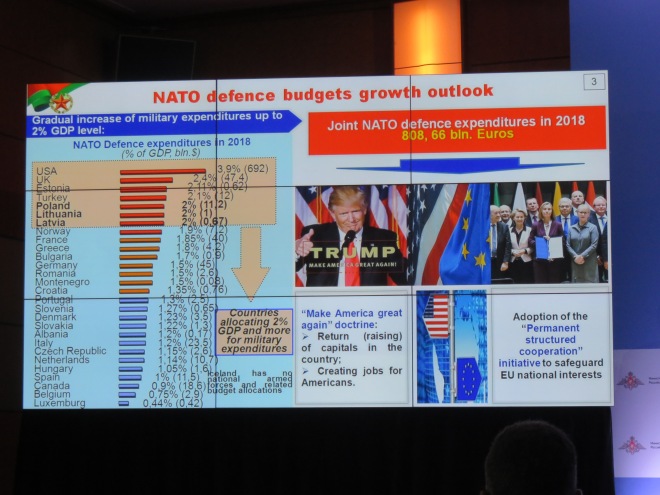 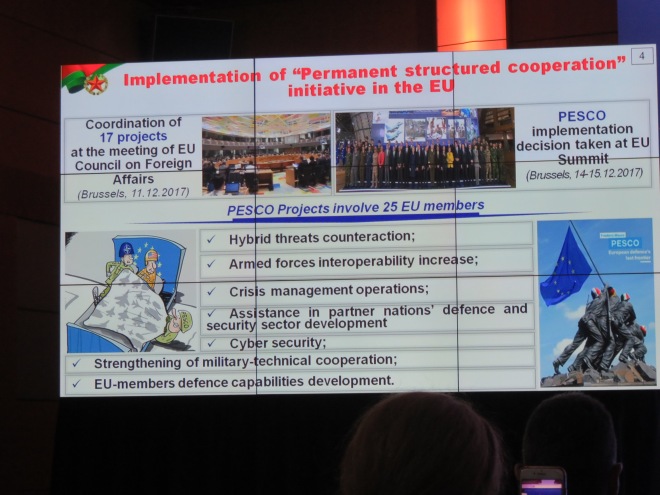 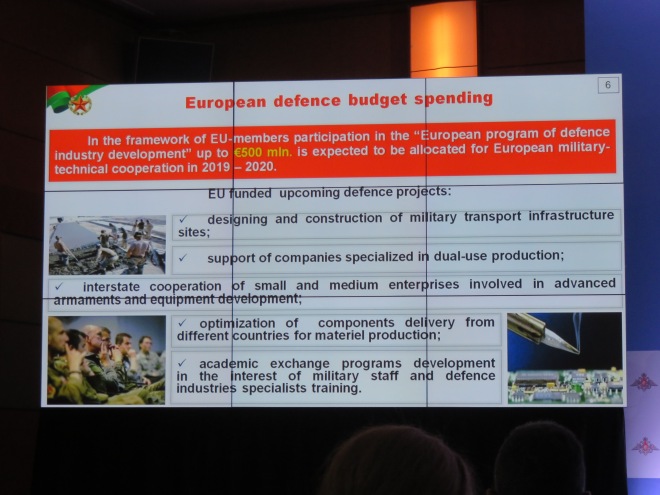 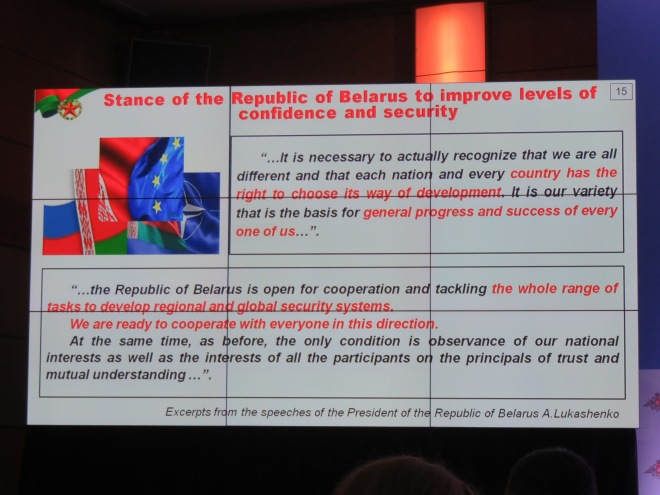 Today’s installment of the MCIS 2016 slides brings us to Andrei Ravkov, the Minister of Defense of Belarus, who spoke at the European security plenary session near the end of the conference. Video of his speech is available in Russian and in English. 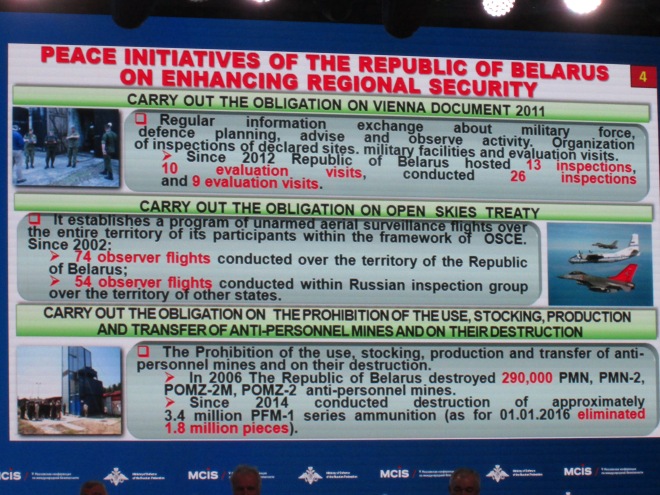 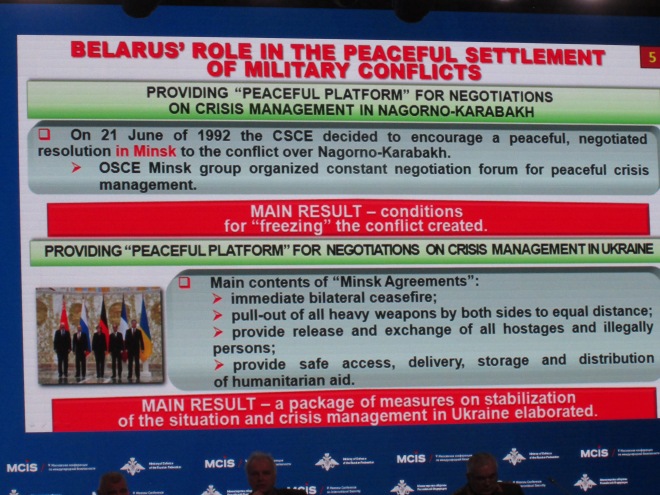 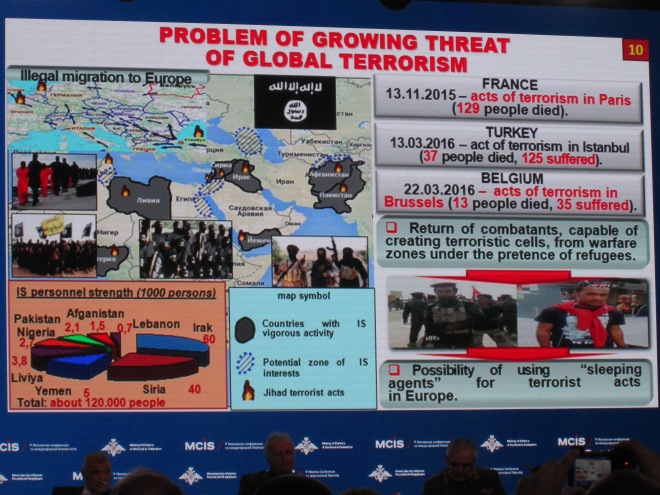 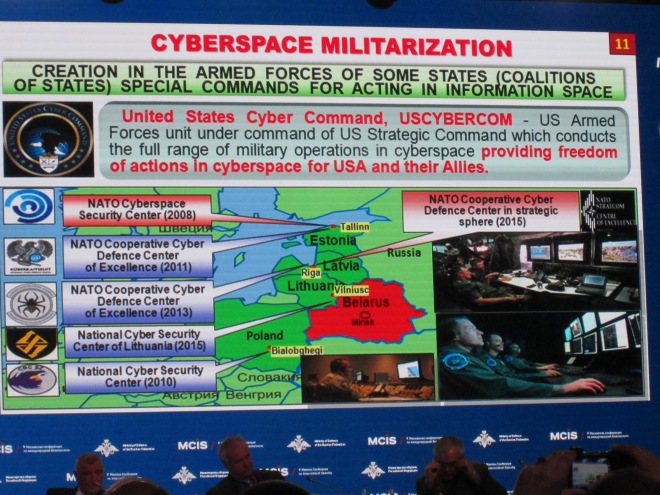 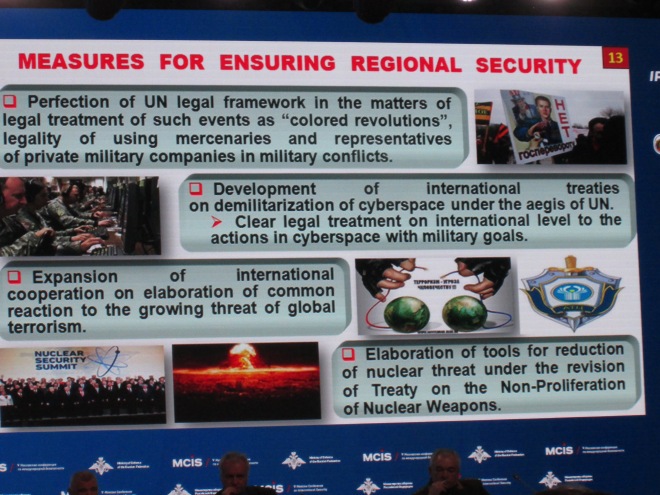 Here’s another set of slides, this one from a presentation by Col. General Sergey Makarov, Commandant of the Military Academy of the Russian Armed Forces General Staff. He spoke at the final plenary panel, on problems of war and peace in Europe. Unfortunately, the MCIS website has provided neither the text of his remarks, nor a video.

I took notes on his remarks, so here are the highlights, followed by the slides.

The European security system was created after World War II and institutionalized with the Helsinki Final Act. The main problem in recent years has been the result of double standards and other countries’ inability to convince the U.S. to reject its backward policies.

Russia is concerned about the ties between terrorist activities in the Middle East and European security, including the threat posed by uncontrolled migration. Russia is also concerned about the return of Nazism and the falsification of history in the Baltics and Ukraine.

Russia can not be separated from Europe, as they are part of a single economic and political space. We need to create a new common security structure that includes the United States but does not exaggerate its role. There’s a need for mutually respectful cooperation on many areas, including counter-narcotics, counter-terrorism, opposing Nazism, and cyber crime.

European values are being diluted. For the first time in centuries, Europe is no longer the center of the international system. Power is moving eastward.

Existing European agreements need to be transferred from a political to a legal basis. Russia would like to see a new treaty, but this is a long and difficult process. For now, would be satisfied if existing agreements were followed and perhaps expanded. 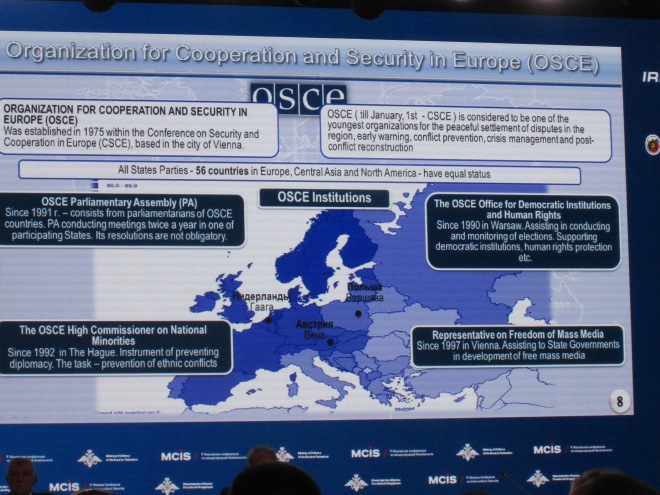 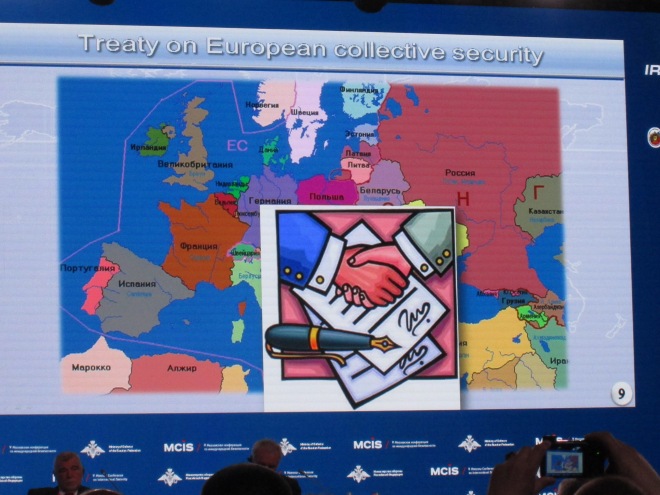 There is a fairly universal consensus in Washington that Russia presents a potential geopolitical threat to the United States. The threat derives from Vladimir Putin’s desire to reshape the international order by restoring his country’s position as a great power and his willingness to modernize and wield Russia’s military forces in service of this aim. However, there is no such consensus on how to deal with this threat. Some experts argue for more robust U.S. and NATO policies aimed at deterring future Russian adventurism, including positioning significant military forces in Eastern Europe, providing lethal military equipment to Ukraine and Georgia, and starting preparations to deploy intermediate-range nuclear forces to Europe. They say that these measures, in combination with Russia’s economic travails, will strengthen the position of those in Moscow officialdom who are opposed to Russia’s military adventurism.

This argument is based on a fundamental misunderstanding of how humans react to threats.

Originally published by War on the Rocks. Click here to read the rest of the article.

I recently received a communication from a French expert on the Russian Navy that provides an interesting (and I think quite accurate) perspective on the Mistral sale.

As you know, France is about to agree to sell four Mistral LHDs to Russia. Many see it as a signal to Russia that “this is ok” to invade all the little neighbors. Personally, I think that it would have been more damaging to the East-West relations to turn down the Russian approach. Built to commercial standards, the Mistral are more like ferries painted in gray and they don’t carry very sensitive technologies.

Many in Russia now consider that the US have taken over from Britain the traditional antagonism against them that led to the Crimean War and to the Great Game. They have sort of accepted this antagonism that has nothing to do with Communism. In this context, it would be interesting to resurrect the fact that during the Crimean and the Civil wars, Russia was a strategic partner of the US against Britain.

I think that we should take into consideration the weakness of Russia, their declining population and contemplate inviting them to a closer security relation. I don’t think that it was smart to press for a Nato integration of Ukraine and Georgia. The fact that the president of tiny Georgia contemplated military victory over Russia by seizing the initiative to reconquer Ossetia is another indication of this Russian weakness. And if you look at their shipbuilding programs and at their o[rder] o[f] b[attle], they will decline even further, just like the Royal Navy. Right now, the Russians are unable to make Bulava work and replace their SSBN fleet; the replacements for destroyers, frigates and submarines are awfully late. The carrier project is an admission that carriers are more effective than missile cruisers. It means that they won’t replace their missile cruisers and just get a replacement for Kuznetsov which is getting old by Russian standards.

My French colleague’s argument reinforces the point that the Russian Navy is declining, and the Mistral, while a fine ship, will not suddenly turn it into the most formidable force in the region. Furthermore, despite ongoing reforms, the Russian military as a whole will also get weaker before it gets stronger, in part because of deteriorating equipment, in part because of a decline in available personnel, and in part because of the retirement of well-trained officers who began their careers in the Soviet period and their replacement by officers who made their careers in the 1990s, when money for training was scarce.

The second point that comes out of the argument above is that European security would be strengthened by including Russia, rather than isolating it. This doesn’t mean that NATO should be replaced by some sort of vague new European security architecture along the lines proposed recently by Medvedev. But it does mean that the U.S. and European states (including the so-called New Europe of the east) should make an effort to work with Russia on security issues of concern to both sides, rather than ostracizing it because of a combination of leftover Cold War fears (for the western states) and fears of Russian neo-colonialism (for the eastern states).

As I noted in my previous post, I don’t think that Russia is interested in restoring its former empire.  Russia IS interested in preventing the emergence of hostile states on its borders — thus the rapid and somewhat excessive response to Georgia’s attack on South Ossetia. The key question for NATO collectively and its member states individually is how to ensure European security while at the same time reassuring Russia that its security interests on its borders will be taken into account. France and Germany have decided that this question can best be addressed by working with Russia on sensitive issues related to regional economic and military security, rather than by isolating it. While this is something that needs to be done with suitable caution, it seems to me that it’s a better idea than isolating Russia or treating it as a potential enemy.