Michael Kofman and I wrote a short piece for the Monkey Cage on the potential impact of the election on U.S.-Russian relations. Go read the whole thing, which also includes contributions from a number of other scholars.

Donald Trump’s victory has the potential to fundamentally reshape U.S.-Russian relations, but whether such a realignment will actually take place will depend on how Trump chooses to learn and appreciate the past failures of several U.S. attempts to engage Russia. It remains to be seen whether he will be willing to follow the advice of professionals, or if he will strike off on his own. U.S.-Russian relations are founded on a complex history, with structural differences among national elites that will prove difficult to bridge through personal rapport among the national leaders. Trump’s first problem will be that other than a small number of close advisers who share his instincts to engage Putin, most of the policy establishment is likely to hold hardened views of Putin’s Russia, ranging from distrustful to confrontational. Rapid change is unlikely to come quickly, despite the personal attention of the president-elect, because the bureaucracy will initially take an obstructionist position.

Having said that, we can make a few predictions regarding policy initiatives that are likely to be undertaken by President Trump. First of all, he is likely to restore the full range of government contacts, including between the two countries’ military establishments. Second, he will pursue more extensive cooperation with Russia in Syria, against ISIS but also against other anti-Assad groups that could conceivably be described as Islamist. Most likely there will be a complete abandonment of the existing policy formulation that there is a moderate Syrian opposition and viable alternatives to Assad, which will closely bridge the U.S. position with that of Moscow’s. And finally, the active sanctions policy against Russia is likely to end, though existing sanctions will not be lifted without a quid pro quo.

Click here to read the rest of the article.

Recently, Michael Kofman and I published an article arguing that Russia’s claimed withdrawal from Syria is not really a withdrawal, but rather a public relations move to normalize Russian military presence in Syria for the long term. Events over the last 10 days have confirmed our analysis and also provided more details on the air forces that Russia is continuing to maintain in Syria. A photo made by the French Centre National d’Etudes Spatiales and distributed via IHS Jane’s shows that as of March 20, there were still 12 Su-24M bombers at Hmeymim, as well as four Su-34 bombers, three Su-30SM fighters and three Su-35S fighters. Zero to three additional aircraft may have been out conducting airstrikes, for a total of 22-25 remaining Russian fixed-wing strike aircraft in Syria. There were also 14 helicopters, including two Mi-28Ns and two Ka-52s. 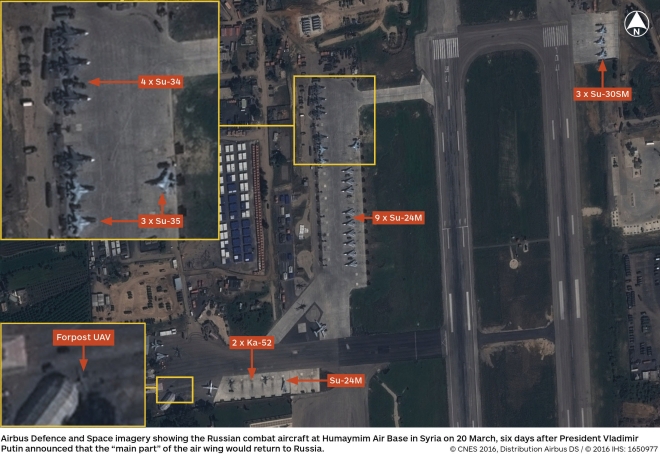 This means that in the first week after the withdrawal was announced, Russia pulled out three Su-24Ms, four SU-34s, all 12 Su-25s, and four Mi-35M helicopters, while adding at least two Mi-28N and two Ka-52 helicopters. The photo also shows IAI Searcher Mk2 Forpost UAVs.

In other words, the current size of the Russian air presence at Hmeymim is comparable to what Russia had at the start of the operation, minus the Su-25s, but with the addition of Su-35s.

With characteristic deadpan delivery, Russian President Vladimir Putin announced the sudden withdrawal of Russian forces from Syria earlier this week, declaring their campaign a success.  Before the day was through, Russian aircraft and crews were already departing from Hmeymim air base in Latakia.  Since this announcement, the media has been alight with speculation on the meaning of Russia’s sudden departure, its political and military implications, and the reasons for this seemingly unexpected move.  Much of the discussion has thus far missed the mark.  There is no Russian withdrawal from Syria, but rather a drawdown of the air contingent present in Latakia. Putin simply moved pieces on the board, without altering the equation.

This maneuver is more about political perceptions than military reality. It constitutes a political reframing of Russia’s intervention in order to normalize Moscow’s military presence in Syria, and make it permanent, while convincing Russians at home that the campaign is over. Putin’s statement is yet another successful effort to achieve a domestic and international publicity coup.

The “withdrawal” announcement is not about how Russia leaves, but about how it stays in Syria.

Click here to read the rest of the article, which is co-authored by myself and Michael Kofman.

A week or so ago, I gave a presentation at the Wilson Center on the current state and future development of the Russian Navy. Michael Kofman of the Kennan Institute was the moderator and Olga Oliker of RAND provided commentary. The audience was very well-informed and asked excellent questions. The Wilson Center has made a video recording of the event available on YouTube. For those interested in what the Russian Navy is up to, it’s worth watching.