I spent last week in Moscow at the inaugural meeting of the Valdai Club’s military section. I will have a number of posts this week with my impressions of the meetings. I’ll start today with a brief summary of the overall schedule and a discussion of the first substantive panel, which was on developments in Russia’s military reform.

Altogether, there were three panels during the conference. In addition to the panel on military reform, the topics covered included cooperation on building a European missile defense system and possibilities for new alliances that could include Russia.

We also visited the base of the 5th Guards Independent Motor Rifle Brigade (former Tamanskaya Division) and the Don-2N multifunctional radar station. We were scheduled to meet with Defense Minister Serdyukov and Chief of the General Staff Makarov, but neither was available, so we met with Andrey Tretyak, the chief of the Main Operations Directorate of the Defense Ministry. We also had some off the record meeting with other MOD and defense industry officials.

Foreign participants included a number of specialists on military and security issues from the US, Turkey, France, Norway, Japan, Belarus, Germany, the UK, and Poland. Of course, there was also a large contingent of Russian analysts and journalists.

So with that overview out of the way, let me focus on the first panel, which took place on Wednesday, May 25. (Other descriptions of this panel may be found here and here.)

The panel was officially entitled “Reform of the Russian Armed Forces,” and featured three speakers. Ruslan Pukhov, the director of the Center for the Analysis of Strategies and Technologies (CAST), began with an overview of the problems that forced the Russian government to begin the radical transformation of the armed forces. 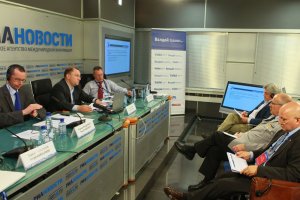 He described the Russian army that existed in 2008 as hydrocephalous, because its control organs were too big for the number of combat ready troops left in the army. After the Soviet Union collapse, the Russian government began to cut the size of the military, but by and large, these cuts affected only enlisted soldiers. Command structures were left more or less the size they were during the Soviet era. This led to an imbalance, with the ratio of officers to soldiers reaching a level of 1 to 1.5. Meanwhile, only 13 percent of the force (about 100,000 soldiers) were combat ready troops. This led to problems as early as the second Chechen war (1999), when troops had to be gathered from all over the country to repel an incursion into Dagestan.

The 2008 war in Georgia showed furthermore that Russian troops not ready  for modern warfare. Airborne troops based in Pskov were able to get to Tskhinvali before regular army divisions based just across the border in North Ossetia. In Georgia, the airborne troops and transport aviation were the only services that performed at a top level. The leadership realized that they no longer needed to maintain a mobilization army, so they decided to shift to a mobile tactical army. Georgia showed that division structure did not fit current needs.

At the same time, problems caused by a 15 year vacation from procurement, during which the budget was only sufficient for the nuclear forces, had begun to affect combat readiness as well. Sergei Ivanov, the previous defense minister, was removed because increase in the procurement budget that started in 2005 did not result in any measurable improvements in output. Top civilian leaders started asking where this money went. It became clear that a professional comptroller was needed. So Serdiukov was brought in as someone with experience in controlling financial flows.

Before the Georgia war showed the extent of problems, the plan was just to limit corruption. But then they decided to expand the goals of reform to include a much broader agenda. This included the shift from a mobilization army to a constant readiness military, the transition from a division to a brigade force structure, the transformation of the personnel system, and reform of military education. Modernization of armaments was also on agenda, including for the first time the possibility of importing weapons from abroad.

Pukhov then described the cuts in personnel and units, the transition to a new command structure, and changes in personnel policies, all topics that I have already covered in this blog in depth and so won’t repeat here.

He concluded with a brief discussion of some of the criticisms leveled at the reform effort, noting that many critics argue that it is moving too fast and that the reform plans have not been fully thought through. Brigades may be inadequately armed, because the MOD is no longer planning for fighting a war that would last longer than a few weeks. Thus, there’s no concept of troop rotation. Also, whether adequate financing will be available to carry the reform through is still an open question.

At the same time, it’s clear that Russia’s top civilian leaders fully support military reform. There’s been no attempt by Putin or Medvedev to distance themselves publicly from politically sensitive decisions. They also continued to finance the reform despite a decline in oil prices during the recent economic crisis.

The second presentation, by Konstantin Makienko, also of CAST, focused on the State Armaments Program (SAP). Makienko reinforced the point that the Russian military received no new conventional armaments for 15 years. Because of this, current equipment is both technologically outdated and just physically old.

The new armaments program is designed to optimize the military for local and regional conflicts. The Georgia war showed that moving two divisions through the Roki tunnel was a very complicated undertaking. The Russian army needed greater mobility. The first steps to this end were taken in late 2008, with a number of orders designed to equip the air force with new aircraft.

The stated goal of the SAP is to have 30% modern weaponry by 2015 and 70% by 2020. General Popovkin played the key role in developing this program, which was hampered by the organizational chaos due to the concurrent reform of all MOD procurement structures. Popovkin started a revolution in relations between the MOD and defense industry by putting pressure on the latter in a way that had never been done before.

The SAP priorities include nuclear forces, high-precision weapons and control systems, and C4ISR systems. At the same time, oddly enough, the SAP calls for significant cuts to R&D spending, which will fall to ten percent of the overall procurement budget, rather than the usual 20-30 percent.

The greatest risk for the program’s success is macroeconomic uncertainty. Financing depends on the future trajectory of oil prices. The next three years are relatively certain because already in budget. Procurement in 2011 & 2012 is funded at the same level as in France (600-700 billion rubles), followed by a significant increase 2013 (to 1166 billion rubles). But the certainty that the budgeted financing will actually be allocated decreases in the out years. Almost all of the increase in financing is for procurement per se, rather than R&D or repair/upgrades. Equipment purchases will increase from 65 percent of procurement funding in 2011 to 70 percent in 2013, while R&D drops from 20 percent to 16%.

As seen from these lists, the MOD is still planning to buy some older designs because they are seen as more reliable than newer projects. For instance, Kilo submarines are being bought in addition to Lada submarines. Since the older designs can be built more quickly, the idea is that these purchases will speed up the overall modernization of the military.

There is much less information available on the rearmament of the ground forces and the airborne troops, and they are supposedly a lower priority than the air force and navy.

The third presentation, by Roger McDermott, focused on Western perceptions of Russian defense reform. McDermott noted that when the reform was announced, there was a great deal of skepticism among Western analysts and policymakers because all previous efforts to reform the Russian military had ended in failure. We had been preconditioned, in effect, to expect the worst. Nevertheless, the reform has been real and implemented at breakneck speed. This has had both positive and negative consequences. On the one hand, it had allowed for real changes to take place. On the other, inadequate planning led to many mistakes. One notable factor has been the openness of the discussion of the reform’s progress in the Russian press.

The goals of the reform are quite long term. Two to five years are just not enough to change the mentality of the officer corps. The most progress has been in the area of organizational structure, while reform of personnel has lagged, in part because of zigzagging on the question of having a contract versus a conscript force. Top commanders still don’t seem fully committed to one or the other option, which creates significant uncertainty about the future trajectory of the reform process.

The discussion after the presentations showed that many participants were far less optimistic than the presenters from CAST. In particular, some of the Russian and Western participants argued that the State Armaments Program would be carried out, some because they thought the financing just wouldn’t be available and others because they thought that the state of the Russian defense industry was just too poor. One participant argued that 50-60 percent of serially produced military goods have defects and the equipment used in defense industry factories is comparable to what was used in the West forty years ago. Meanwhile, the average age of the workers at these factors approximately matches the average male life expectancy, while the few new engineers are not yet experienced enough to take over as the remaining Soviet-era workers retire or die.

The personnel question caused a particularly animated discussion. Participants discussed the reasons for the MOD’s inconsistent policy on personnel issues, with insufficient salaries being seen as the main culprit for the initial failure of proposals to increase the numbers of contract soldiers. The recent resumption of efforts to increase the number of contract soldiers was seen as a political decision made in the Kremlin.

At the same time, there were disagreements on the types of contract soldiers needed for the Russian army, with some participants arguing that the need was for highly skilled specialists, while others noted that the primary advantage of a professional military is that soldiers stay longer and can gain experience on the job so that a high skill level should not be a requirement for enlistment.

The consensus was that higher salaries and better working conditions will increase the prestige level of service in the Russian military, allowing for its gradual professionalization. This will affect both enlisted personnel and officers. The increase in officers’ salaries slated to go into effect in January 2012 may have a particularly significant effect, while executive order 400 (which provided bonuses to the best officers) has had only a negative effect by increasing incentives for corruption (as shown by recent exposes about kickback schemes in the air force).

Thus, the overall tenor of the panel was of cautious optimism. The participants agreed that the reforms begun more than two years ago are much better than maintaining the status quo. But there was concern about the government’s ability to carry out some aspects of the reform program, especially in the areas of personnel and procurement.